How to film a wight polar bear?

So in the leaks we heard that there will be a fight not only with lots of conventional wights north of the wall, but also with a wight polar bear - and that Thoros of Myr will be killed by this beast.

This promises stunning action scenes - but how in seven hells do you film such scenes? Basically, there are two possibilities: 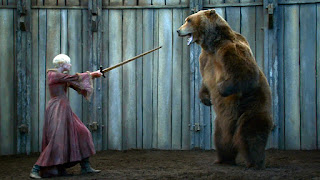 While the first way is quite laborious and expensive, the second one seems to be completely impossible. Polar bears are extremely dangerous and fierce animals and surely can not be trained to act in front of a camera or even work with actors, can they?

Well, the first surprise when researching this topic was this: Remember that scene from season 3 where Brienne has to fight a bear? In fact this was filmed with a real bear, and Gwendoline Christie & the bear did film the scene closely together, only separated by a small electric fence!

So would this theoretically possible with a polar bear? As it seems there is at least one crazy animal trainer who lives and works very closely with his 800+ pound polar bear named Agee: 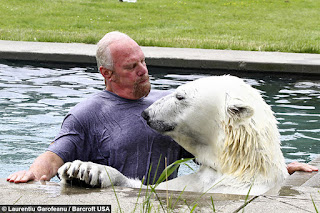 This guy not only wrestles and swims with his bear, but they also spend their time together "on the road working on TV and film sets". Agee even has her own IMDb entry, and according to this site she has lots of experience being filmed for movies or commercials.


To complete the picture: Now guess who worked with Agee in a Norwegian movie from 2014 called Operasjon Arktis? Good old Tormund Giantsbane - he even has a short fight with that bear: 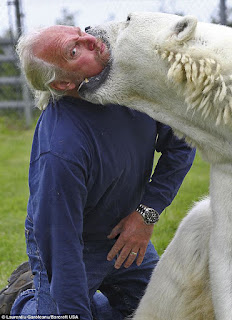 So if D & D were thinking about how to shoot that polar bear scene, they only had to ask Kristofer Hivju about his experiences with Agee. And if they chose to book her, the scenes would probably have to be filmed either in British Columbia, Canada (where the bear lives) or at the west coast of the USA. Transporting the bear to Europe would be both very difficult and illegal, which was the reason why the scenes with Brienne and the bear had to be filmed in a Los Angeles studio.

I doubt we'll get any information on this topic before the season airs - but if Paul Kaye or other actors of the wight hunting team would be sighted in Canada or around LA, that could be a clue.

Until then, we simply have to imagine the head of Thoros of Myr in the picture to the right...