TL;DR: New photos show that director Jeremy Podeswa directed scenes with Bronn, Jaime and his new sword "Widow's Wail" on the walls of Trujillo Castle. Clues indicate they might have been filming Jaime leaving KL towards the North after his breakup with Cersei in episode 7.

Yesterday both the Daily Mail and JustJared published new, unseen pictures from the shooting in Trujillo that took place one week ago.

Besides Jaime's new sword "Widow's Wail" (which was detected by Twitter user Adrián Alonso from Bilbao) there was another detail in those photographs worth reporting - in one of the pictures we can clearly see director Jeremy Podeswa together with Bronn on the walls of the castle: 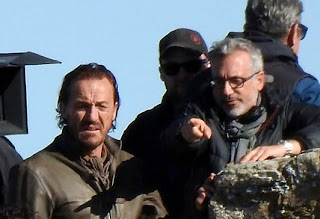 As Podeswa is known to direct episodes 1 and 7, this has direct implications for our understanding of the season 7 storyline. It means that at least some scenes with Jaime and Bronn have no connection to Highgarden (which will be focused in episodes 2-4), and probably also not to Casterly Rock (the rumours about CR and the leaks seem to imply it will not be focused in episodes 1 or 7).

So if we have to speculate, the most fitting location where we could find Jaime and Bronn in episode 1 or 7 would be King's Landing. We do not know at this moment if we see KL in episode 1, but in the last episode we will have the big meeting of main characters when Jon Snow and his allies bring the captured wight into the capital.

Unfortunately we have no context around these photos at all, so all we can do is speculating some more: These scenes could be Jaime and Bronn watching the delegations arrive at KL; or Jaime just before his departure towards the North after being informed about Cersei's planned treason.

Then, this is the first time we see Jaime with the Valyrian steel sword "Widow's Wail" - how and why did he get it? It was originally reforged from Ned Stark's sword Ice and given as a wedding gift to King Joffrey by his grandfather Tywin Lannister. After Joffrey's death it was last seen at his funeral in the Great Sept of Baelor.


We have no idea what happened with it afterwards. Jaime did not wear or use it up to now - he was always seen with a plain standard Lannister sword:


So this detail could have some importance. Maybe the reason for him wearing "Widow's Wail" is his imminent departure to the North, after having witnessed the wight at KL and having learned about the usefullness of Valyrian steel weapons against the Wight Walkers. Plus, he obviously takes a step away from Cersei after she tells him that she does not intend to keep the promise she made to Daenerys and Jon, and she will not send troops to fight the White Walkers.

And how will he get hold of "Widow's Wail"? Either Cersei gives it to him after the death of Tommen, in a symbolic gesture or in another attempt to tie him back to herself. Or Jaime goes Sam Tarly-style and simply snatches the sword from the Red Keep's wall before leaving KL.

But remember: most of this is speculation. Only thing we know for sure is that the Jaime / Bronn scene on the Trujillo castle walls was directed by Jeremy Podeswa and thus should appear in episode 1 or episode 7.

Jaime, Bronn and the Tarlys on the battlefield

Thanks to twitter user @RickZornow who spent his vacation in Spain visiting GoT locations and providing excellent pictures in PAP4U style, we have new photos from Los Barruecos showing some known characters for the first time on set!


By closely examining the other pictures, you can make out other interesting details.

There are some pictures with two riders - one of them is definitively Randyll Tarly, riding the dapple grey horse we've seen him on before. The second, bigger one might be his son Dickon, played by actor Tom Hopper in season 7:


And finally, we can make out a new flag besides the ubiquitous Lannister banner. It's hard to make out any details, but given the fact that it is green and we have Tarlys on location, it probably is their banner:


You can check out many more pictures on Twitter - again, many thanks to @RickZornow for his great photos (and his talent evading the Guardia Civil ;-) )!
Posted by Green Chili at 13:08 No comments:

Almodovar: Highgarden, Casterly Rock or both?

Many theories were floating around about the identity of Almodovar Castle in GoT season 7, but finally we got some nice visual clues - just look at the banners: 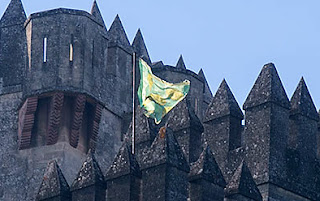 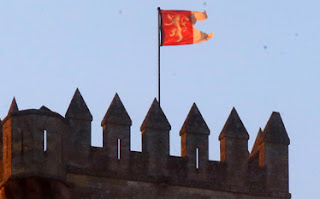 Say hello to Highgarden, everyone!

Doesn't exclude the castle being also used for Casterly Rock, of course... ;-)
Posted by Green Chili at 01:48 No comments:

A new GoT location in Iceland?

Today WotW reported about a possible new filming location in Iceland and published several photos of a user who claimed they showed "a set in the works" near a hydroelectric dam, and mentioned that "a local shopkeeper" confirmed this was a GoT location.

Additionally, the article proposes "there is a fake icy-stone alley being constructed". Though the pics look intriguing, this unfortunately is not the case.

Some detective work via Google showed that there has not been any kind of special setup or preparation - this is what the site always looks like. Well, at least in the last few months.

It's a construction site at Búrfell Power Station which is being enhanced until 2018, and those walls look like this because they have been prepared during the excavation process (I'm not an engineer, but it seems to be kind of a shotcreting construction); but certainly not for GoT or another production. The following pics are official ones published by the constructing companies in July / August 2016:

You can even watch a nice aerial video of the whole area here (well, they obviously had drones there! ;-)):


That being said, the location could theoretically be used for GoT production anyway, but there simply is not the slightest clue hinting at it at the moment... besides that mysterious "local shopkeeper" of course ;-).

Well, I guess that "shopkeeper" (if he exists) is just having a very funny time, quietly giggling to himself. And we will have to continue looking for GoT locations in Iceland...