GoT Promo Pictures and Episodes

While browsing through the promo pictures from February and March, I noticed that several pix are having suspicious names that seem to hint to the episodes those pix are coming from.

When you check out the official Making Of GoT page, you will see that the first three pictures have the episode number still left in their filenames, for example GOT602_072815_HS_DSC_8814.jpg or
GOT_MP_092415_EP601-3556.jpg; the rest seems to have been cleared.

But there are other sites where many high-res pictures still bear their original names - including the episode number they are taken from. For example on this page: http://setlistmx.com/tivi/hbo-comparte-imagenes-de-la-sexta-temporada-de-game-of-thrones/.

I hoped to find even more clues in the IPTC information included in those files, but unfortunately this seems to have been more thoroughly cleaned; I found only one pic (Sansa looking down and holding her cloak open) where IPTC keywords are still to be found – they read: “13 sansa, dragon unit, ep601, ext stream, sc12, _cast, _episode, _scene, _set, _unit”.

So if you put together all that information, you end up with the following relation between pictures and episodes: 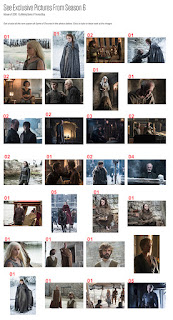 Or in words, here's what we will see for sure in the first three episodes:

Furthermore, there’s Davos in Ep. 04, Melisandre and Brienne in Ep. 05, but the context is unknown.

Of course all these episodes may and will contain many other story lines besides those mentioned (though the first one seems quite stuffed yet ;-) ).
Posted by Green Chili at 20:52 No comments: