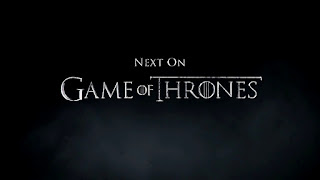 After episode 1 mainly delivering a recapitulation and exposition for the things to come (with two surprises - Dorne and Melisandre), episode 2 will certainly move things ahead fast.

HBO just released a preview for episode 2; if we put that together with the hints and images we already had, this is what I'd suspect to see next week.

EDIT 1: Now also the description for episode 2 has been published:

EDIT 2: Obviously a very detailed description of the Winterfell vision from episode 2 has been leaked. Not more content of episode 2, but Bran's vision laid out in a very detailled way. So ONLY follow the link to the following YouTube video if you REALLY want to get spoiled about that part. And it definitively helps to understand Spanish... ;-) :   Video


Lots of things to look forward to!

The Blood of a Dragon

Jon Snow is dead. Dead as dead can be. We saw that last season, we saw it in episode 1 of the new season.

But since the moment we watched Jon Snow lying on his back, eyes open, dying in a decorative pool of blood, people started to search for hidden clues about his future.

In the blood spreading under Jon's body, some saw a direwolf, others a "spreading, blood-black dragon's wing": 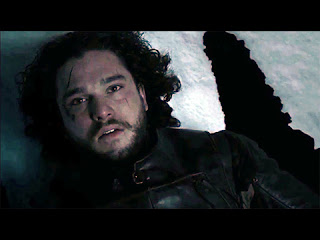 To be honest, I did not see a single thing in there - in my opinion you needed VERY much fantasy and a screenshot of just the right millisecond to find anything like that...

But when Episode 1 of Season 6 got released, there was one scene that made me (and lots of other people) sit up and take notice. After Jon was found and carried away by his friends, Ser Davos is standing at the place where Jon lay. He's looking at the bloodstained ground. And standing there. And looking. And standing. And looking. 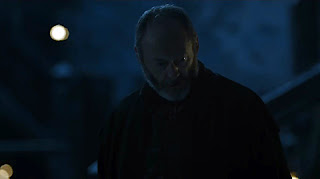 Much too long. It was very obvious that they wanted to show us that Davos was looking at something he thought very interesting, or mysterious; well, might as well have been he just remembered having left the teakettle on the hot stove when he left his house, but I don't think that was it.

His face showed surprise, irritation, astonishment, frowning... There was something about that bloody snow (hah! Bloody Snow ;-) ) that set his thoughts in motion.

Unfortunately, we do not see clearly what he was seeing (because of course we are not meant to do) - we can only make out parts of the bloodpool around Jon; and when his body gets carried away, the careless brothers of the NW trample through the blood.

But at least we get some impressions, from different direction, height and angles:

If we try to put those partial glances together (which is quite hard because the shots are taken from very differing points of view), we end up with something like the following picture:

Is this an omen that foreshadows Jon Snow's future? Is it really a flying dragon?

Or is it just blood spilled in the snow?

While putting together my thoughts on the return of Thoros of Myr (which have been rendered obsolete in big parts by Episode 1 ;-)) and the consequences for a possible Jon Snow resurrection, I realized that another topic started to move more and more into the foreground.

So I followed that line of thought to discuss it in a separate post.

Yeah, I know. Up to a few days ago I was very sure myself that the Lady Stoneheart plot would NEVER occur in the TV show, but now I'm getting more and more suspicious. There simply seem so many things falling into the right place:

Damn, NOW I start seeing a ZombieCat shadow on the horizon too...

So at the moment my predictions are:

1. The ex-warrior and nowaday peacenik (Ian McShane) connected to the outlaw band revives Catelyn Stark. That explains why he makes only a one-episode appearance: "he has a relatively small amount of screen-time during the season, yet his character is of key importance."

2. While on their search for Arya, Brienne and Pod are getting caught by the band of outlaws and brought to Lady Stoneheart. We'll see the trial ("Oathbreaker!"), the hanging getting interrupted and afterwards Brienne and Pod going to Riverrun to meet Jaime as ordered by LSH.

3. If, as I suspect, neither Brienne nor LSH know about Jon's death, it could be Melisandre who's going to get Thoros of Myr to try a resurrection. I hope they put Jon's body in an ice cell for the time being ;-) .

4.  Or, if LSH gets informed about Jon Snow's death, she could accompany Thoros of Myr to Winterfell. This might even lead to her meeting with Littlefinger in that ominous Winterfell Godswood scene. And this would be a very symbolic meeting, as it would mirror another meeting that happened exactly in the same spot in S01E01: between Ned and Catelyn Stark. 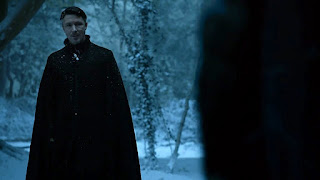 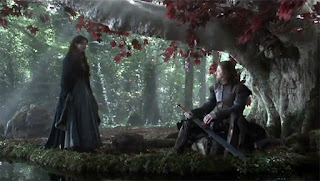 Ok. Now it has happened, episode 1 (and 1 only) has been leaked 2 days before the official release. One guy published pictures from a french subtitled version of episode 1 and the complete storyline, some others claimed that the episode was made available much too early on some on-demand TV service.

Either way, the cat’s out of the bag (not Schroedinger’s Jon though ;-) ) and won’t be put back in again…

But as most of the episode 1 storyline was known before (with a bunch of scenes and pictures published by HBO), there are only two real surprises (well, more or less surprises depending on what you knew before): the Dorne storyline and of course the hyped "shocking" Melisandre event. I won't give away those spoilers here, but only discuss their implications storywise. 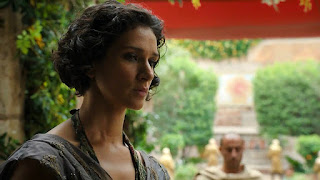 The first one seems to surprise lots of people; though it follows exactly the line I theorized about since having read the red carpet premiere reviews: "Elsewhere in the Seven Kingdoms, the women are taking control too – in some regions, terrifyingly so." That kind of said it all before, and Ellaria's expression in the last promotion video confirmed it for me. Farewell, Prince Doran. 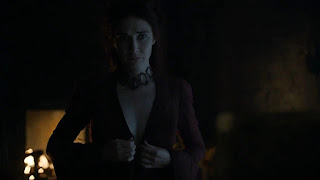 The latter one is no real surprise for book readers and ASoIaF theory nerds; but how in seven hells do they sell this to the TV audience when they did not show a single of the many hints in the books before? I can't see how this shall work.

And more important: as "shocking" this may be to some, it does not give the slightest clue how this connects to the Jon Snow dead / resurrected topic. And how will this "set the scene for some powerful sorcery to come"?

Another short Game of Thrones trailer

HBO has just released another short trailer for episode 6. While there are many scenes we saw before in other teasers, trailers or photos, some are completely new or give us new impressions of known storylines.

All of the new scenes have been incorporated in the Season 6 Episode Guide.

Here are the most important and interesting of them: