More clues and details from the official promotion pictures

Browsing through the official pictures we got, I looked a bit closer into the files to see if we could get more clues about episodes and storylines (as we did before season 6).

And while most of the pictures have been renamed and scrubbed of all specific information, a bunch of them still carry interesting details: mainly episode numbers, scene numbers, location description, characters shown and shooting date.

Some location names are revealing - for example they confirm that the shot of the Brotherhood members is taken at the FARMHOUSE we know from season 4, and one picture of Sam takes place in the AUTOPSY CHAMBER of the citadel.

Additionally, we learn the name of young Lord Umber, who together with Alys Karstark takes part in the meeting of the Northern lords: he is called Ned Umber - which may sound strange at first, but is not too surprising, as the Umbers were always loyal bannermen to the Starks; at least until Smalljon Umber switched sides and joined Ramsay Bolton.


Almost all of those pictures are from episode 1, which allows us to have some insight in the order the scenes will be shown in the first episode. Here's what we have:

This guide contains
As new information shows up, this guide will continually get updated.

Episode 7: "The Dragon and the Wolf" (Director: Jeremy Podeswa)

Images and scenes from unknown episodes
Posted by Green Chili at 21:16 No comments:

About an unidentified trailer scene

One scene in the first season 7 trailer that wasn't totally clear was the one where we see someone grinding his / her weapon in a dark room. We do not see much of the person (nor the room), only a hand moving over the tip of a weapon: 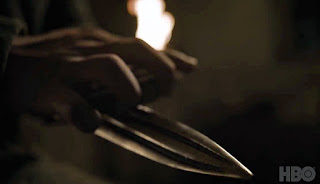 As the hand in this scene does look a bit feminine, and we hear Cersei mentioning her "enemies to the South" in the background, one may get the impression this might be one of the sandsnakes sharpening her spear. After looking into it again, I am quite sure that this scene shows another person though:

Grey Worm sharpening his dagger before his departure towards Casterly Rock.

And I think this scene directly precedes his sex scene with Missandei - she probably enters his room while he is preparing his gear for the assault on CR.

Why? Have a look at these pictures:

1. The blade is the typical dagger worn by the Unsullied; we can see it on Grey Worm's hip at the fighting scene at CR in the trailer, and he's wearing that dagger in earlier seasons too:

2. The sleeve in the "grinding" scene has a structure that is very similar to what Grey Worm is wearing when Missandei undresses him. And Grey Worm indeed seems to have rather "feminine" hands:

3. The open flame that is visible behind the hand in the first scene could be the same we see behind Grey Worm in the sex scene; plus, the colors and tone of both scenes look very similar:

Everything seems to fit together in those two snippets from the trailer.

What do you think?
Posted by Green Chili at 12:46 No comments: